This section discusses the importance of using performance data to make decisions. It highlights the role of performance measures and identifies how they are used to establish achievable performance targets. A more detailed discussion of Transportation Performance Management can be found in Chapter 2.

As discussed in Chapter 2, transportation agencies have embraced the use of performance data to drive investment decisions. A performance-based management approach enables agencies to select and deliver the most effective set of projects for achieving strategic objectives, while also improving internal and external transparency and accountability.

A fundamental component of the framework is the use of performance measures to evaluate system performance and the importance of establishing business processes to evaluate, monitor, and use the data to influence agency decisions. These are achieved by aligning decisions at all levels of the organization with the agency’s strategic objectives and ensuring that the right performance measures are being used to drive decisions. This alignment helps to ensure that resource allocation decisions and the day-to-day activities of agency personnel support the agency’s priorities and the interests of external stakeholders.

Agencies with a performance management framework in place have benefited from:

Figure 6.1 Monitoring and Adjustment in the TPM Process 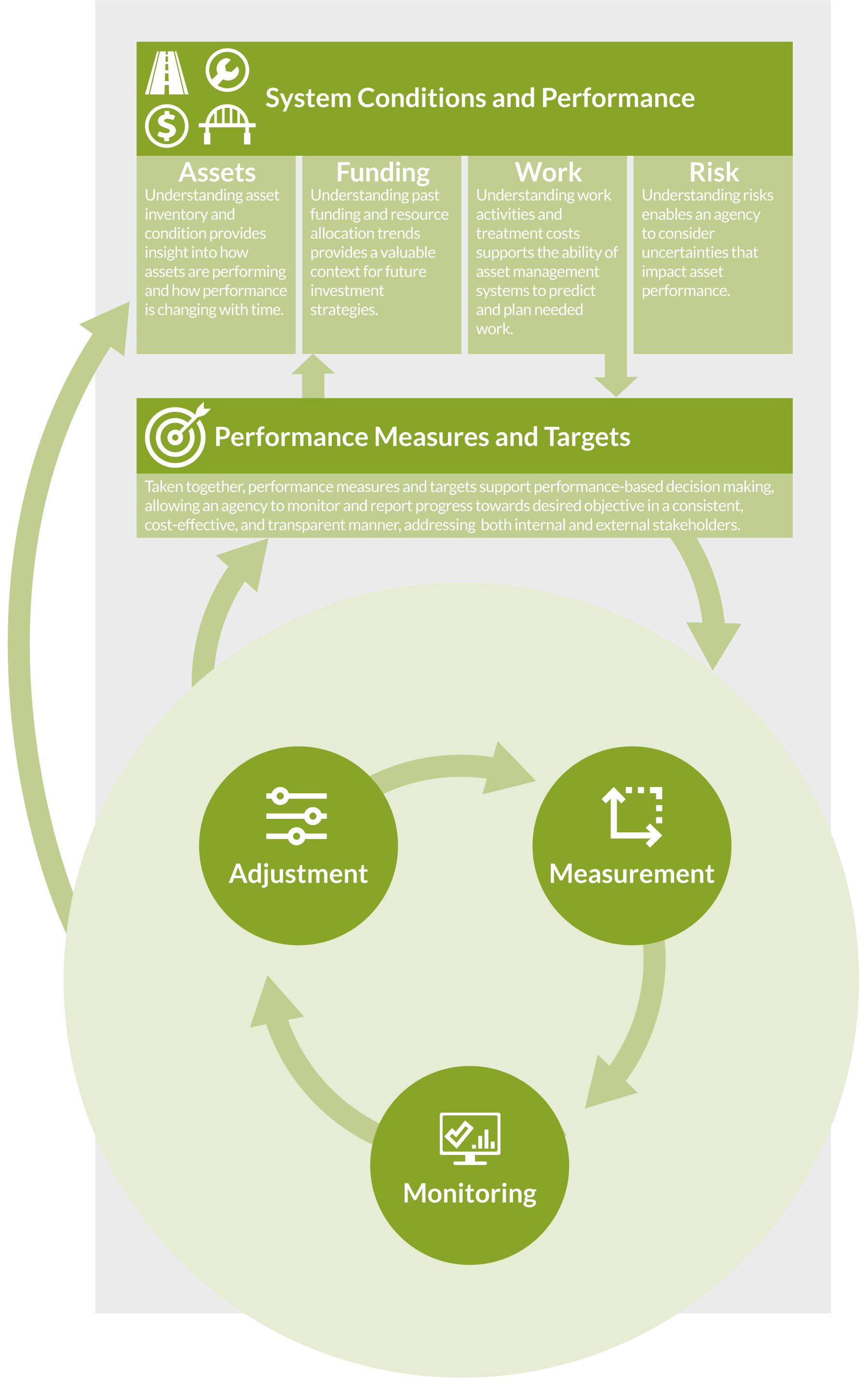 TIP
It is important to select performance measures that are meaningful to the agency and that can directly inform decisions. This may vary depending on the agency context, culture, and TAM maturity.

In 2001, during the development of a long-range transportation plan (LRTP), the Arizona DOT took a strategic approach to how investments should be made. Under the new approach, Arizona DOT established the following three investment categories:

To implement the new initiative, the Arizona DOT developed a report titled “Linking the Long-Range Transportation Plan and Construction Program” or” P2P Link” that applied financial constraints to the long-term vision. Through a collaborative process that involved a consultant, local and regional governments, and transit agencies, the Arizona DOT published an implementation plan for putting the P2P Link into practice. The resulting process includes scoring projects based on both a technical and policy score that are added together to determine a project’s ranking. The technical score is generated by the asset owner based on an analysis of the data while the policy score is determined based on each project’s contribution to LRTP goals and performance measures. The process helps to ensure that projects are ranked in accordance with the agency’s strategic objectives using only the most meaningful criteria in a transparent and defensible way. 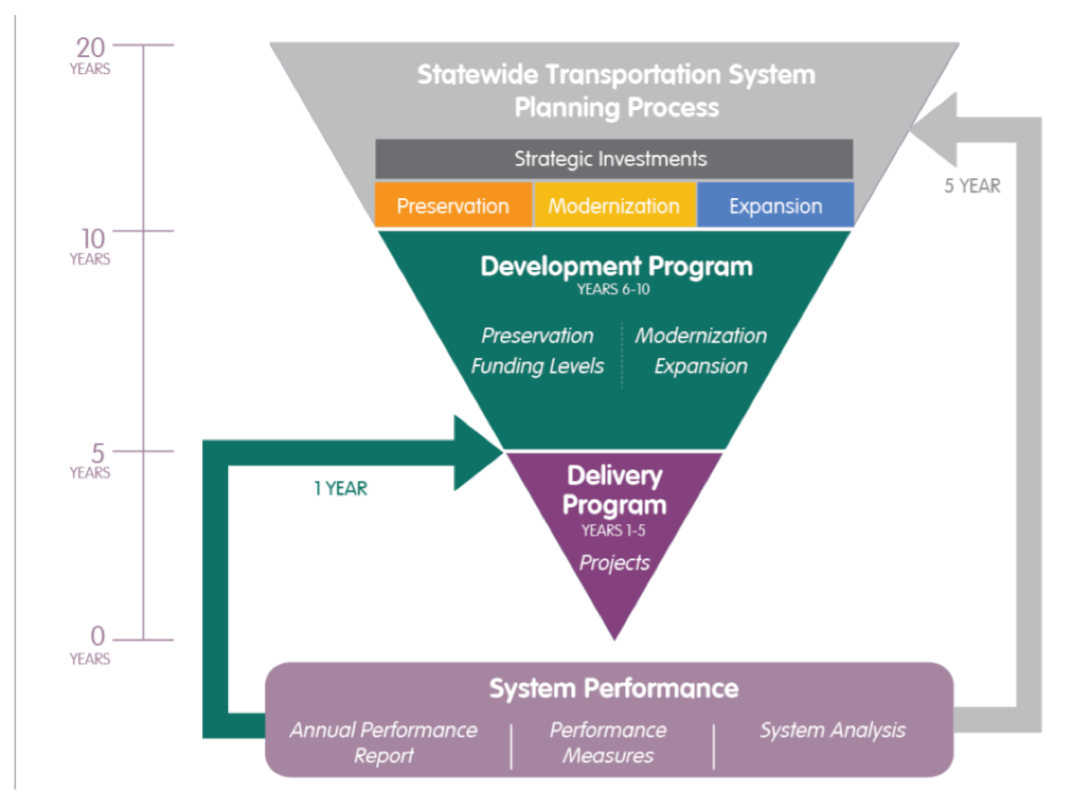 The most effective performance measures drive decisions that are important to the success of the program. For example, maintenance departments may use performance measures that track actual expenditures to planned expenditures to ensure that available funding is directed towards the highest-priority items, as shown in the Colorado DOT practice example.

It is also important that the measures drive the desired performance within an organization. For instance, a performance requirement that measures whether pavement or bridge designs are submitted on time might cause incomplete or incorrect submittals to meet a deadline, leading to an increase in construction modifications. A more effective measure might focus on a minimal number of design modifications during the construction phase of a project.

Effective performance measures should also primarily be outcome-based rather than output-based, meaning that they focus on the result or impact of an activity rather than the inputs that went into the activity. Several examples of outcome- and output-based measures are shown in the sidebar on Page 6-8. Outcome-based measures are generally preferred because they indicate the effect on the traveling public resulting from the actions taken, so they usually relate to user priorities such as the length of time for a road to be cleared after a snow event or the absence of litter and graffiti. They are developed based on a description of what an agency wants to achieve as a result of the actions undertaken. Outcome-based measures are commonly used for managing ancillary assets such as drainage assets and signs. For instance, the performance of drainage assets might be reported in terms of the percent of pipes/culverts greater than 50 percent filled or otherwise deficient and the performance of signs might be reported in terms of the percent of signs viewable at night.

Output-based measures, on the other hand, track the resources used to achieve the outcome, such as the number of hours of labor used or the number of light-bulbs changed in a month. While the data is important information for managing resources, it does not necessarily drive outcomes that would matter to the public. For instance, travelers on a highway are much more interested in knowing when the road will be cleared of snow than how much overtime went into the operation.

When possible, agencies should use performance measures that are leading measures rather than lagging measures to influence future decisions. A leading measure uses changes in performance to provide insights into potential changes that might influence a future decision one way or another. For example, knowledge that a ramp meter has exceeded the manufacturer’s suggested service life might drive a decision to replace that meter. Similarly, increases in equipment downtime might indicate risks due to an aging fleet are growing or that planned operational activities will not be performed as planned. A lagging measure, on the other hand, looks back on the results of past investment strategies after the decisions have been made. Because a lagging measure is recorded after the fact, there is a delay (lag) in the agency’s ability to adjust its practices and improve performance. Bridge and pavement condition measures are examples of lagging measures because the reported conditions reflect the impact of decisions made several years in the past. Lagging measures are commonly used to evaluate a program’s effectiveness or to verify that actual investments achieved projected results.

In transportation, an agency might have a lagging measure for tracking complaints responded to within a 48-hour window. The measure provides an indication of the public’s satisfaction with the road network and is easy to monitor and report. However, if an agency really wants to effect change, it might develop leading measures to track the percent of complaints not worked on within a two-hour window or the percent of complaints that can’t be resolved by the initial point of contact and must be passed to someone else. Focusing on these types of measures could drive agency decisions to ensure complaints are being worked on quickly and are being assigned to the right people. General characteristics of effective performance measures are presented in Table 6.1.

The North Carolina DOT authorizes its divisions to determine how funding will be used for maintenance activities and uses performance data to assist with this activity. Each year, Division Engineers submit annual plans detailing what work will be accomplished; these plans are reviewed quarterly with the Chief Engineer to discuss actual versus planned work. Their accomplishments are also displayed in a dashboard for internal use, as shown in the following image. Public-facing dashboards are also available showing overall conditions and performance trends. The Division Engineers are also held accountable for their performance, since their planned and actual performance data are incorporated into their annual evaluations. 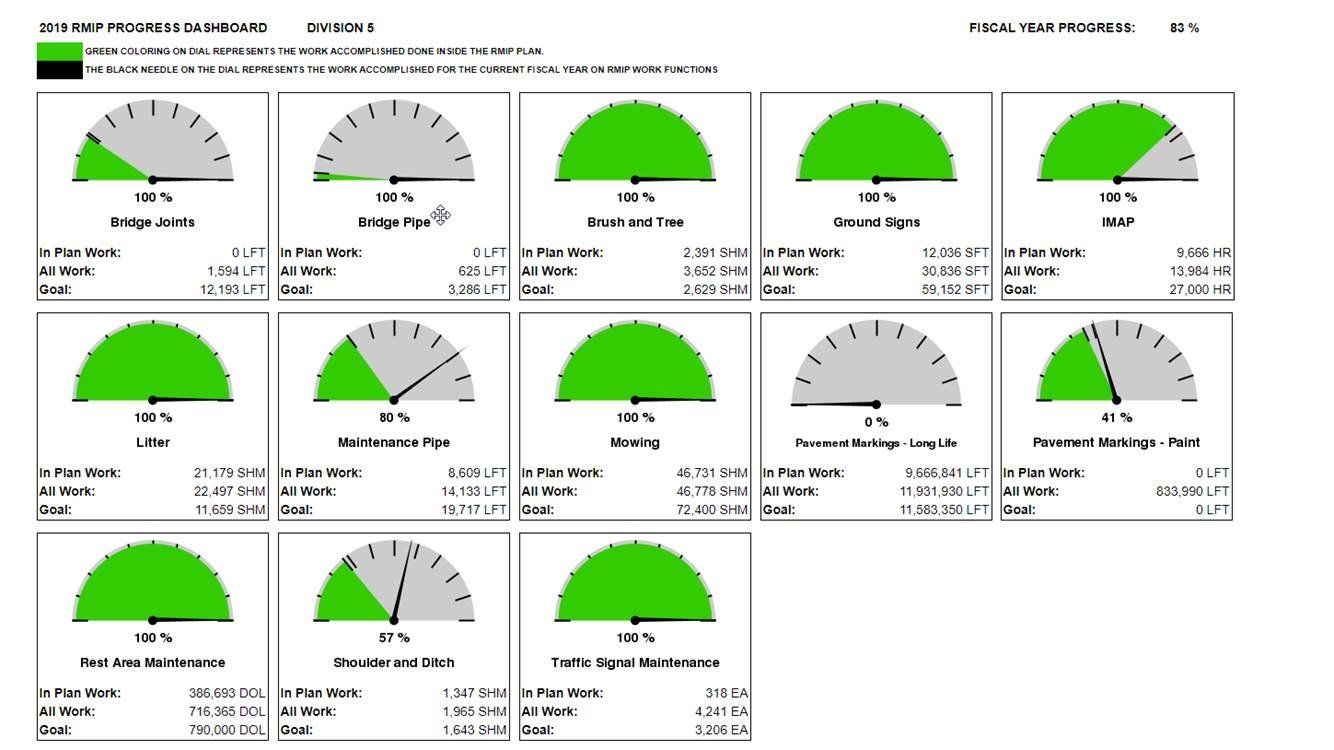 Use of Performance Measures

Performance measures are used to:

TIP
Outcome-based measures better relate to performance characteristics noticed by the public and other stakeholders than output-based measures.

The Washington DOT uses its Maintenance Accountability Process (MAP) to comprehensively manage maintenance budgets and to communicate the impacts of policy and budget to both internal and external stakeholders. Field condition surveys are conducted annually to assess the condition of 14 assets on the highway system such as signs and signals, ITS assets, tunnels, and highway lighting. For each asset, a level of service target is established, based on expected funding levels and importance of the asset to the agency’s strategic objectives. The targeted and actual performance is summarized on a statewide basis and presented to the legislature, media, internal stakeholders, and other DOTs in a format similar to what is shown in the figure (https://www.wsdot.wa.gov/NR/rdonlyres/8EC689DF-9894-43A8-AA0F-92F49AC374F5/0/MAPservicelevelreport.pdf). In 2018, Washington State DOT achieved 77 percent of its highway maintenance targets. Targets that were not achieved are shown as red bullseyes and areas where the targets were exceeded include a checkmark with the bullseye. The results illustrate where additional investment is needed on a statewide basis and provides a basis for setting maintenance priorities during the year.

To support accountability, credibility, and transparency, the Washington State DOT publishes its quarterly performance report, referred to as The Gray Notebook. Each edition of the Gray Notebook presents updates on multimodal systems' and programs' key functions and analysis of performance in strategic goal areas based on information reported to the Performance Management and Strategic Management offices of the Transportation Safety and Systems Analysis Division. Washington State DOT also publishes its Gray Notebook Lite, which highlights key metrics referenced in the Gray Notebook in a format for quick reading. Examples from each of these documents are presented in the figures. 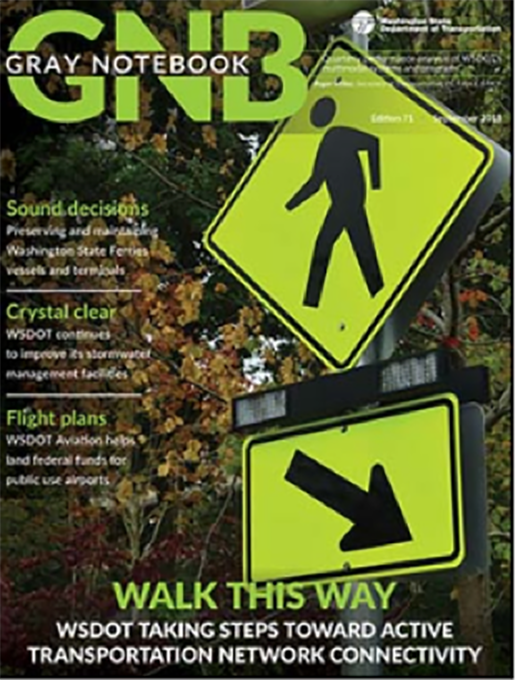 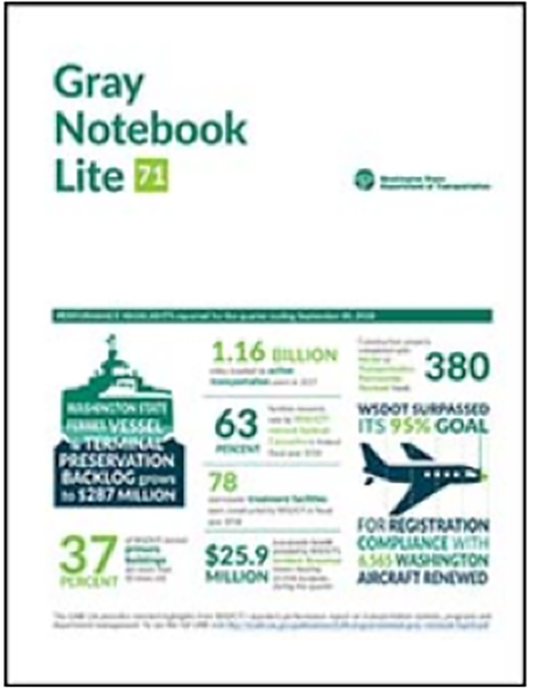 Performance dashboards are also a popular way to present progress, using color-coded indicators similar to those on the dash of an automobile. An example of the interactive dashboard available from the Virginia DOT is shown in the figure. The screen reports performance in seven areas (performance, safety, condition, finance, management, projects, and citizen survey results) and the needles indicate whether the performance is within targeted ranges. Hyperlinks are available in each area if a user wants to explore historical trends or explore performance objectives in more detail. 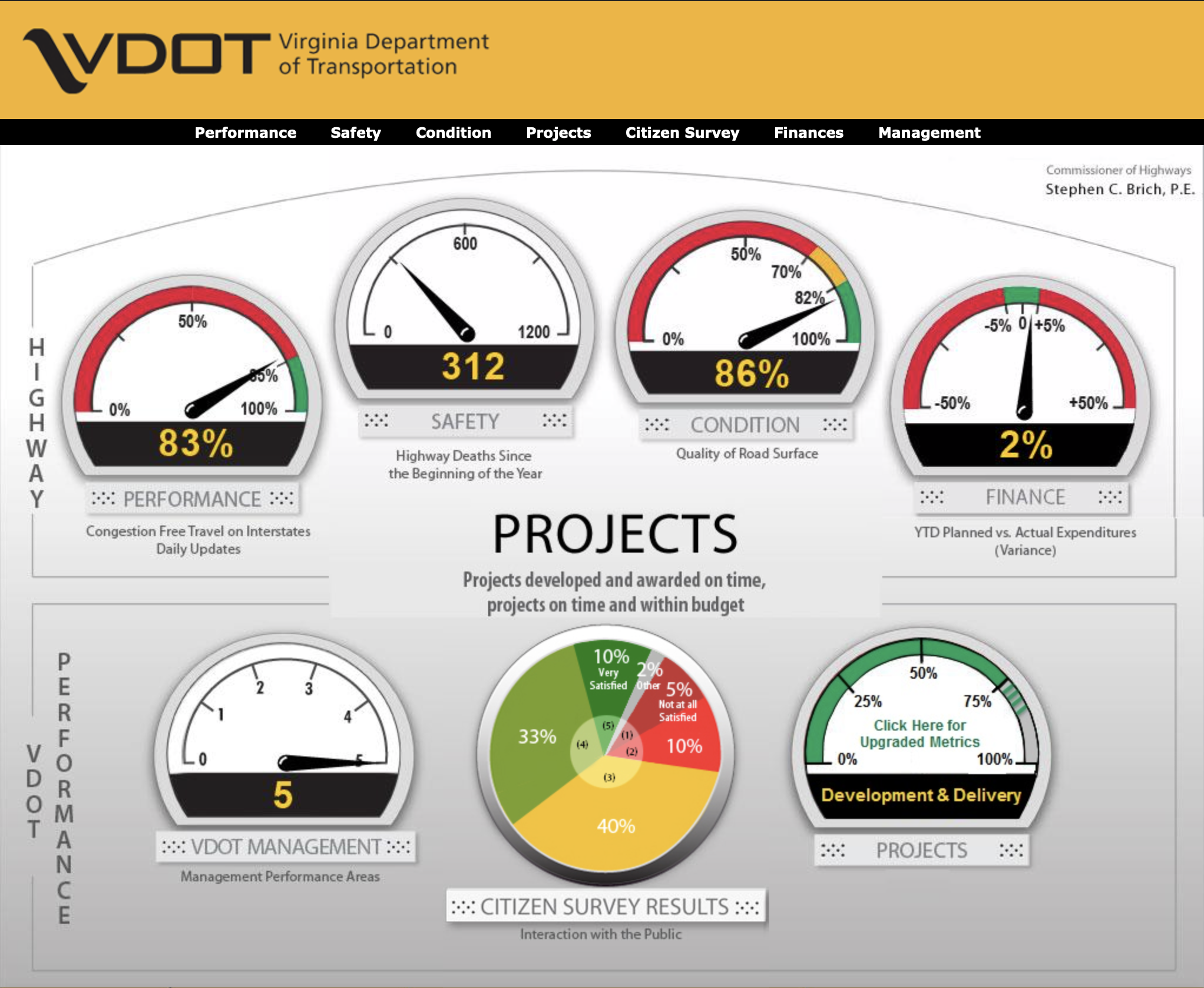 As agencies advance the maturity of their practices and move towards investment decisions across assets and modes (as discussed in Chapter 5), there is increasing interest in the use of leading measures and asset performance measures other than asset condition.

Asset management plans document the processes and investment strategies developed by an agency to manage its infrastructure assets. These asset management plans support an agency’s performance-based planning and programming processes for making long-term investment decisions and feed shorter-term project and treatment selection activities. Together, these activities ensure the investment decisions of an agency are aligned with performance objectives and goals.

Examples of these types of measures include:

TIP
Making performance measures publicly available through reports, scorecards, or dashboards increases transparency into agency operations, which can serve as motivation to improve staff’s desire to meet the standards established, thereby increasing the chance of success.

The North Carolina DOT has an interactive Organizational Performance Scorecard that provides an online indicator of the Department’s success at meeting targets in the following six core goal areas:

An example of how the information is shown; it presents the target for an overall infrastructure health index and the most recent results. As shown by the red “x” in the box on the far right, NCDOT is not currently meeting its target of a health index of 80 percent or more.

Characteristics of Strong Performance Measures for Managing the Condition of Ancillary Assets. Section 6.1.1

Successful performance measures for managing infrastructure assets other than pavements and bridges should have most of these characteristics.