The availability of current work history and performance data allows agencies to develop and improve models used in a management system to predict future conditions and determine treatment effectiveness. This section describes and illustrates the use of this data to improve existing models.

An important function of an asset management system is the ability to predict asset deterioration rates so changes in condition over time can be modeled for use in planning and programming activities. In the absence of data, models can be developed based on expert judgment, but as historical performance trends are established based on actual data, the expert models should be replaced by or calibrated against the real data.

The AASHTO Transportation Asset Management Guide: A Focus on Implementation (2011) introduced the following thought process to help an agency evaluate their deterioration models and determine whether improved data is needed to enhance future forecasts:

In 2011, the South Dakota DOT initiated a project to revise the pavement deterioration models developed in 1997 using 17 years of historical pavement condition data. The tool for developing the models included features allowing all the condition-versus-age data points for each pavement meeting the family description (based on surface type and pavement structure) to be plotted on a graph, facilitating a comparison of the historical model and the recommended model based on the updated pavement condition information. In this example, the blue line (labeled as the user-defined model) represents the model being used in the pavement management system for predicting faulting on a thick, short-jointed doweled concrete pavement and the gold line (labeled as the regression equation). The regression analysis on the historical data, represented by the red data points, indicates faulting is occurring at a much more accelerated rate than was previously predicted. As a result, recommendations for addressing faulting were likely lagging the actual need observed in the field. 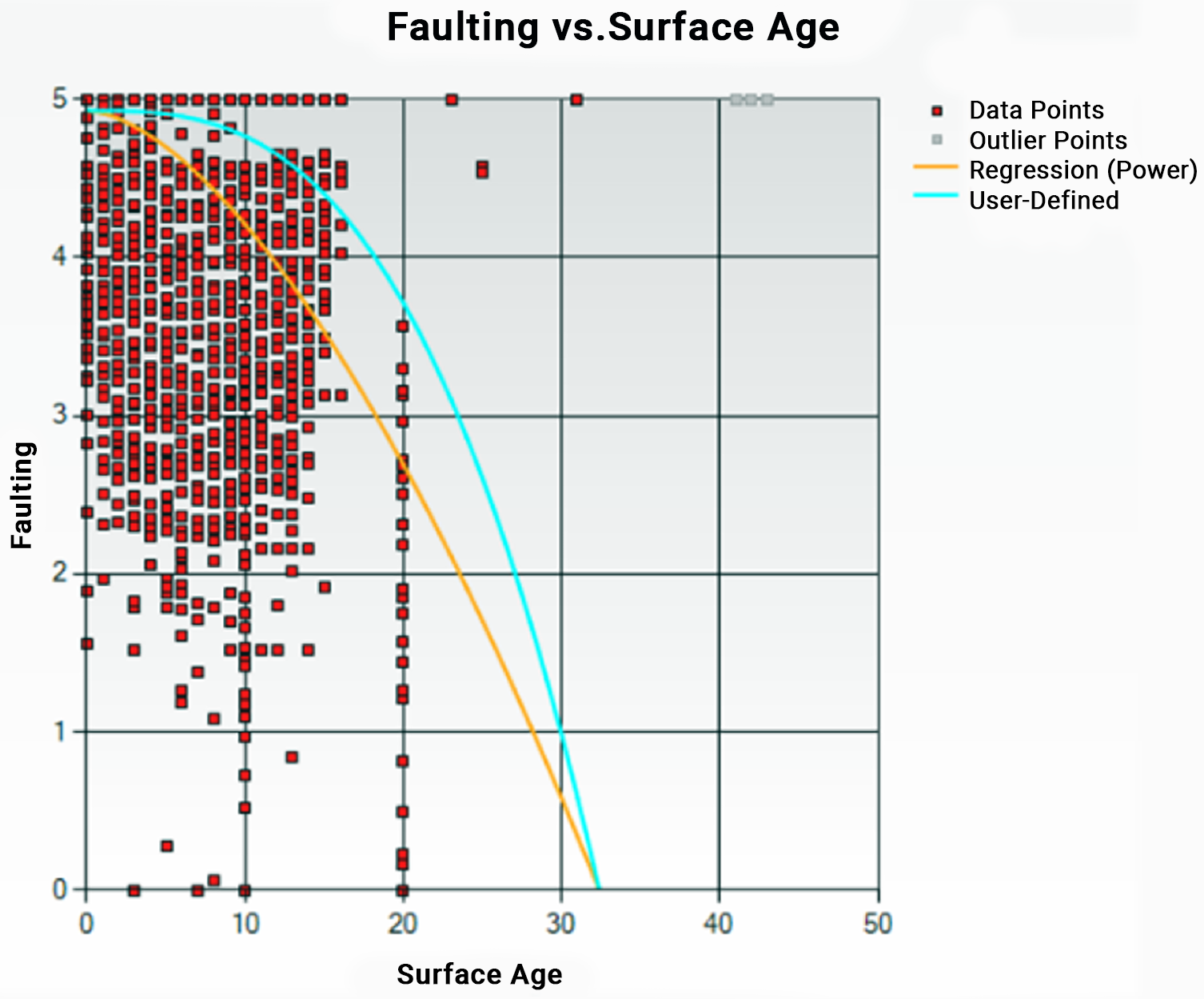 The Auckland Harbour Bridge corrosion protective coating system has been undergoing regular maintenance since the bridge opening in 1959. Historic practice was to spot abrasive blast corroded surfaces followed by spot painting and applying a full overcoat. While this process was effective in maintaining the protective coating, it also resulted in significant amount of contaminates being discharged into the Waitematā Harbour despite of the precautions being taken.

In an effort to reduce the discharge, various options have been considered taking into account the protective coating performance and longevity, with the aim to achieve the lowest practicable environmental discharge and whole of life costs.

One option involved collecting the abrasive blasting removal of the coating via the use of full scale containment to capture contaminants. However, it was found that this option would require strengthening of the bridge to safely carry the containment under wind loading at a cost of NZ$65M over a 10-year period.

As such, by undertaking a comprehensive review of the coating maintenance, a 40 years Coatings Maintenance Plan was developed. The identified lowest whole of life solution involved:

Thus, allowing for the continued corrosion protection of the bridge 125,000m2 external surface areas in a marine environment, while providing a cost effective and environmentally responsible solution.

The Toronto Transit Commission initiated a review to determine optimal bus life for their fleet as well as assess the potential for hybrid propulsion technology. Through specialized modelling methods, a data-driven approach was used to assess the total cost of ownership (TCO) for their fleet vehicles. This review analyzed historical asset work order records along with other capital and operating expenses to help identify the optimal asset life cycle. The four key areas analyzed were:

The model provided insights on when the optimal time to dispose of a fleet vehicle to minimize overall fleet cost, the comparative TCO of different vehicle types, and the relative effect and up-time benefit gained for different operations and maintenance activities or rehab treatments, by engine or other component types used in the fleet. They advanced their understanding of treatment effectiveness and allowed them to make more informed decisions about fleet renewal.

The Washington State DOT conducted a pavement life cycle analysis using performance and cost data that demonstrated the cost-effectiveness of its pavement preservation projects. Based on the results that are documented in their Transportation Asset Management Plan (https://www.wsdot.wa.gov/sites/default/files/filefield_paths/WSDOT_TAMP_2019_Web.pdf), the DOT instituted a “one touch policy” requiring all capital projects to have had at least one pavement maintenance treatment by Maintenance or contracted work forces before it can be programmed for a pavement preservation project. This has enabled the DOT to defer capital improvements on pavements by two to three years, or in instances of multiple touches, by four to six years at a very low cost. In 2018, the agency received an additional $6 million to test a similar program on bridges. In addition to being a cost-effective use of available funds, the programs have helped build buy-in among maintenance personnel by demonstrating the importance of the data they collect.