Risk registers, risk reports, and risk mitigation plans are commonly used tools to track and manage risks. This section describes and illustrates each of these tools.

A risk register is one of the most common tools for tracking and managing risks within an agency, since it provides a framework for capturing critical information about each risk, its importance to the agency, mitigation plans and tracking and managing responsibilities. A risk register is typically generated as a spreadsheet, though other formats are available. An example of a comprehensive risk register, which includes assignments for risk mitigation strategies, is presented in Figure 6.5. Over time, columns may be added to indicate when the risk information was last updated, what further action is required and whether adequate progress is being made towards the mitigation strategy.

A risk register should be reviewed at least quarterly to evaluate whether the risk register or the risk management plan for any of the performance areas needs to be updated. Periodic changes to the risk profile may be obtained through executive staff meetings meant to evaluate progress regularly, or ongoing reports tracking risk mitigation efforts and results. Annually, the agency may determine whether any strategic-level risks should be adjusted based on evaluation of the agency’s performance and the risk reports provided by the risk owners. 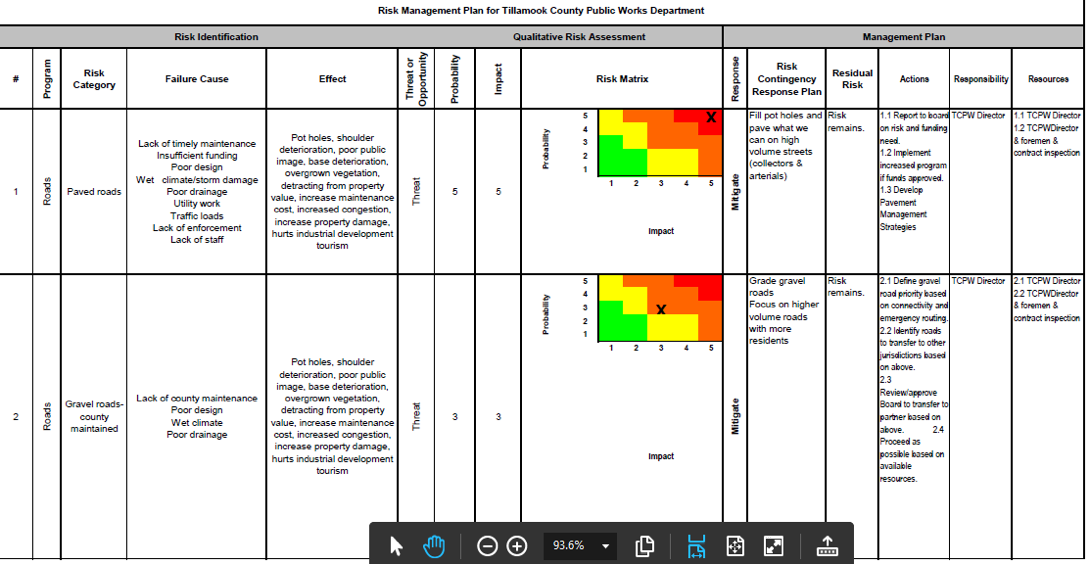 Risk reports, which reflect excerpts from the risk register, may be developed by risk owners to communicate ongoing activities and manage risks at any level of the organization. The type of risk report shown in Figure 6.6 conveys what steps are being taken to address project delivery risks.

Some agencies see benefit in developing risk mitigation plans for their assets to ensure compliance with regulatory programs and help embed risk into all agency business activities. For example, a risk management plan may be developed when a bridge’s risk of failure reaches a certain threshold. These plans identify specific risks and mitigation strategies to undertake in order to reduce the likelihood or impact associated with the risk. 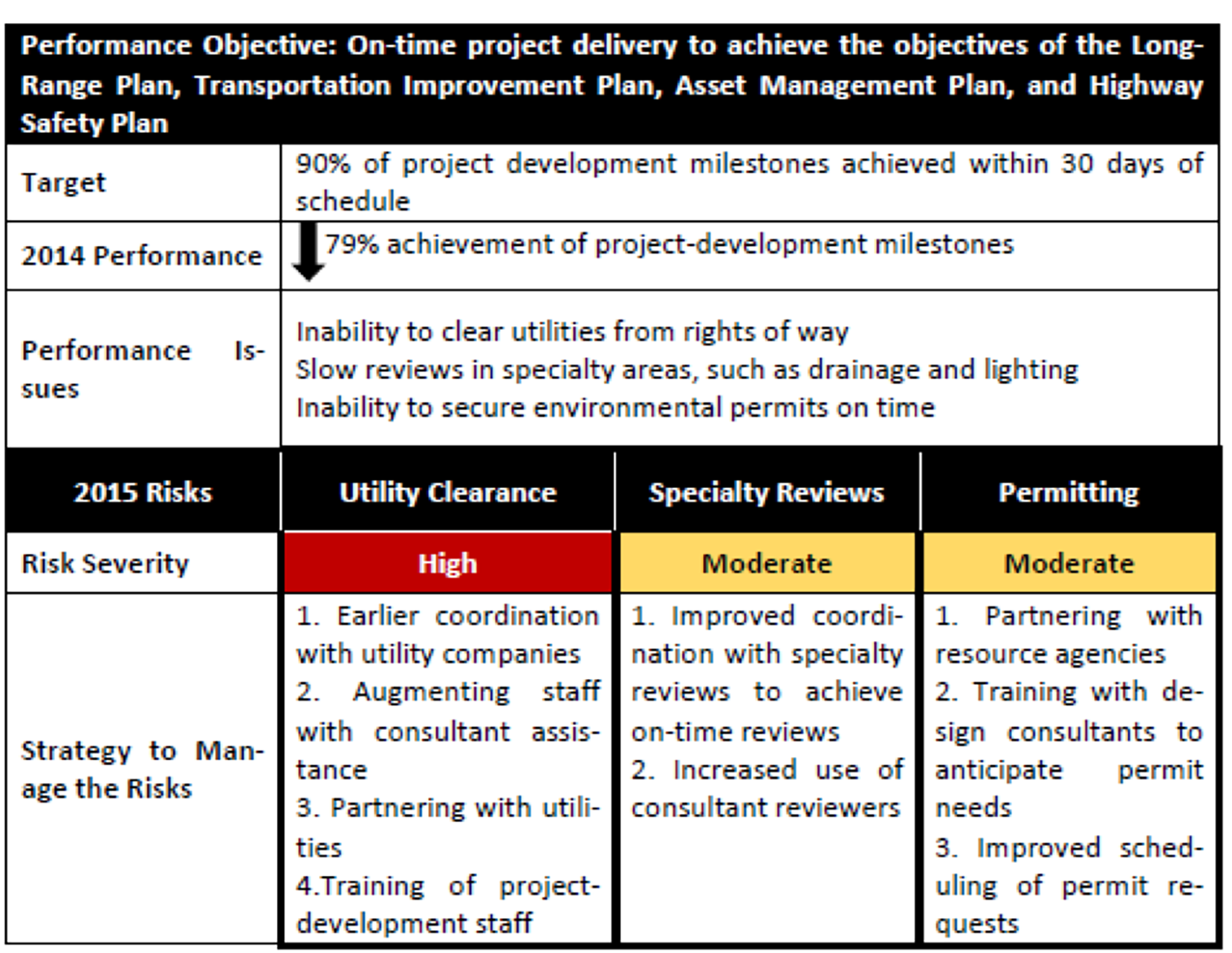 Source: AASHTO. 2016. Managing Risk Across the Enterprise: A Guide for State DOTs.

The Washington State DOT recognized the potential safety risk to highway travelers and the adverse impact on regional commerce associated with unstable slope failure. To become more proactive in managing this risk, WSDOT developed the Unstable Slope Management System (USMS) that provides a method for evaluating known unstable slopes and using the information to prioritize slopes for funding of proactive stabilization efforts. The mitigation objective of the unstable slope management program is to sustain a desired state of good repair and low risk over the life span (> 20 years) of known unstable slopes and constructed geotechnical assets at the lowest practicable cost.

BART developed a Local Hazard Mitigation Plan in 2017 to reduce or eliminate long-term risks to human life and property related to hazards such as earthquakes, tsunamis, landslides, flood, sea level rise, wildfire, and drought. The analysis focused primarily on high-priority fixed assets such as passenger stations, substations, switching stations, train control rooms, shops/yards, ventilation structures, and emergency exits. These assets were prioritized based on criticality in terms of the impact of an asset failure on reliable and safe service capabilities. The Local Hazard Mitigation Plan details the potential impacts associated with each hazard type and presents prioritized mitigation actions that were determined by votes from the participating members of a Task Force Committee called the Emergency Preparedness Task Force Committee (EPTFC) that is made up of senior managers from all BART departments. The plan is updated at least once every five years. An example of the type of mitigation strategies that were developed are presented in the Figure below. The Plan has helped identify agency priorities that are being addressed and has fostered collaboration among different Departments to reduce potential hazards.

Agencies should monitor external considerations that may influence agency risk, including those listed here.