Monitoring the implementation of new business processes benefits from a clear definition of roles and responsibilities. This section illustrates approaches that agencies use to assign responsibility for implementation activities so that progress can be tracked.

A key step in managing risks and other implementation activities is establishing a set of roles and responsibilities for each of the tasks at hand. The risk management process introduced in Chapter 2 includes a step for monitoring risks on a regular basis through a risk register or some other format.

When assigning responsibilities for managing risks, different types of risks are normally assigned to different individuals or divisions within a transportation agency:

An agency may elect to appoint a Chief Risk Officer or to create an Enterprise Risk Unit charged with coordinating the agency’s risk processes and training agency personnel on risk management. If such a unit is created, the Chief Risk Officer often reports directly to the agency’s chief executive officer or another high-ranking executive, symbolizing the importance of risk management to the agency. Agencies without a formal Risk Unit may rely on the Asset Management Coordinator to serve in this role. Examples showing how risk roles and responsibilities have been assigned are provided in Figures 6.8 and 6.9.

The success of a TAM Improvement Plan that outlines steps the agency plans to take to enhance its asset management program will also benefit from a clear set of roles and responsibilities for:

Ownership for the implementation of the planned enhancements generally lies with the TAM Coordinator in an agency, with specific tasks assigned to one or more individuals with the specialized skills and capabilities that are needed.

A major function of the implementation leader is to ensure that all roles are understood and that the various assignments are being carried out as intended. This may require building buy-in among the team members, who are likely busy with other responsibilities. It is also important that the leader have the authority responsibility to hold individuals accountable for progress, even if they report to a different division within the agency. 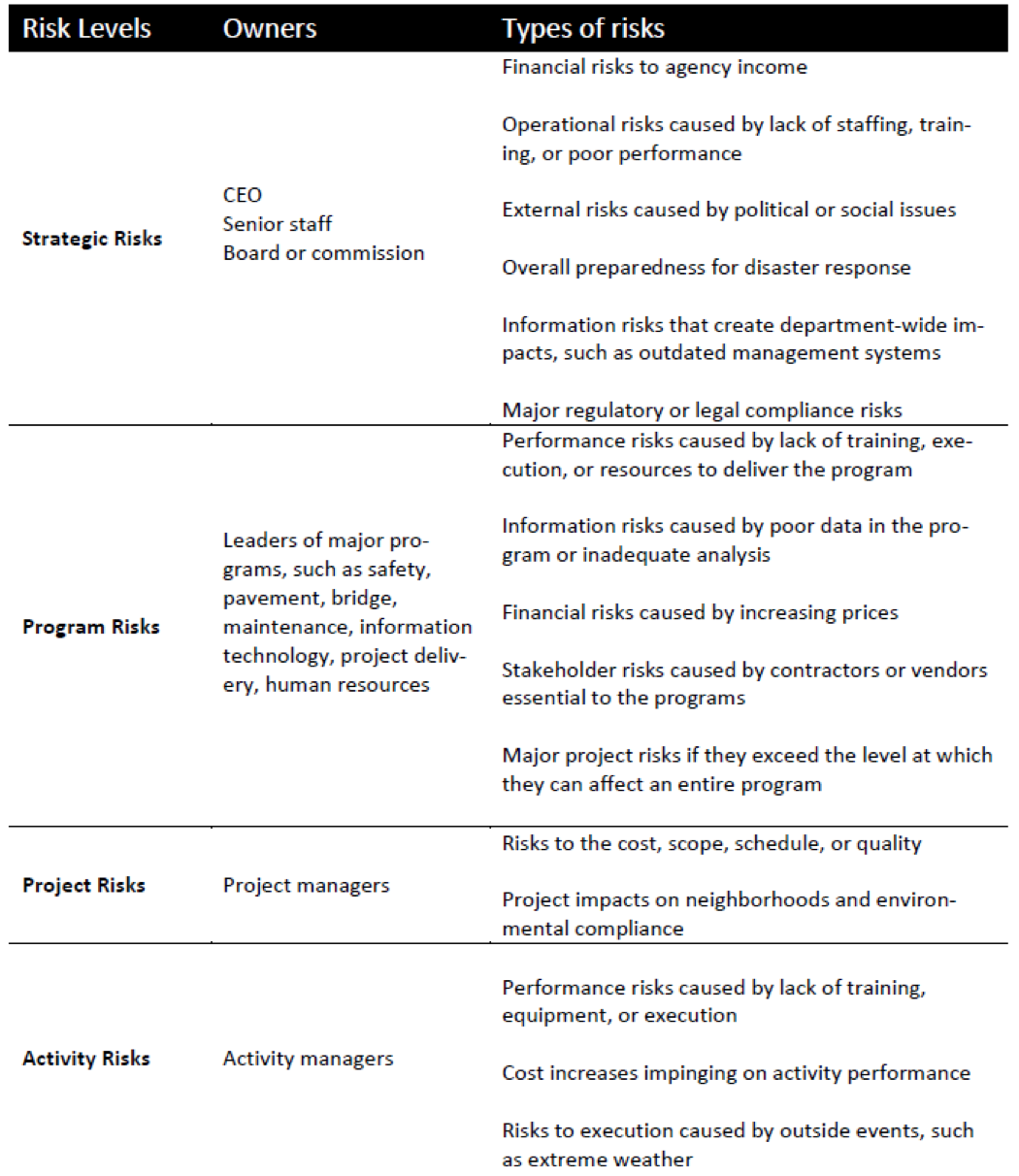 Source: Transportation Research Board. 2014. Managing Risk Across the Enterprise: A Guide for State DOTs.

The availability of adequate resources is also important to the successful implementation of an improvement plan. Establishing clear role descriptions that describe the required tasks to be completed and the requirements needed to implement the changes enables an agency to compare the availability of existing staff to the implementation requirements. In some instances, staff may be temporarily assigned responsibility for a particular activity, such as developing a TAMP, to address a specific need. 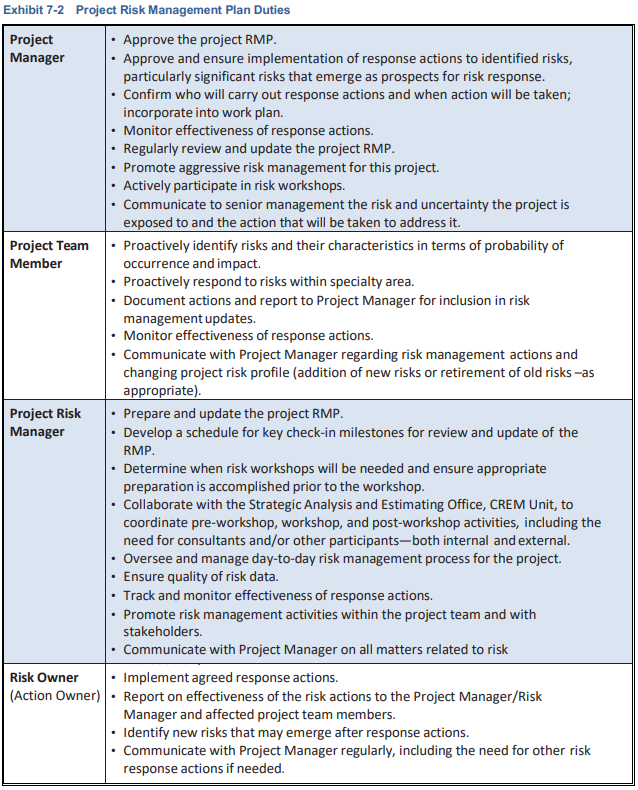 Using a RACI Matrix to Assign Roles and Responsibilities

A variety of tools can be used to track roles and responsibilities, including spreadsheets or various type of matrices. One form of responsibility assignment matrix is known as a RACI matrix. The term RACI is taken from the words:

A RACI matrix can be used for virtually any type of activity with a combination of tasks, milestones, and key decisions that will be carried out by several different individuals. It is a common technique used for managing different types of construction, implementation, and monitoring activities and is especially useful when responsibilities are divided across divisions or departments within an organization. For that reason, it is commonly used as part of an enterprise-wide risk management program to help ensure that risks are monitored regularly. An example of a RACI matrix showing responsibilities for adopting an enterprise risk management (ERM) policy is shown in figure 6.10. 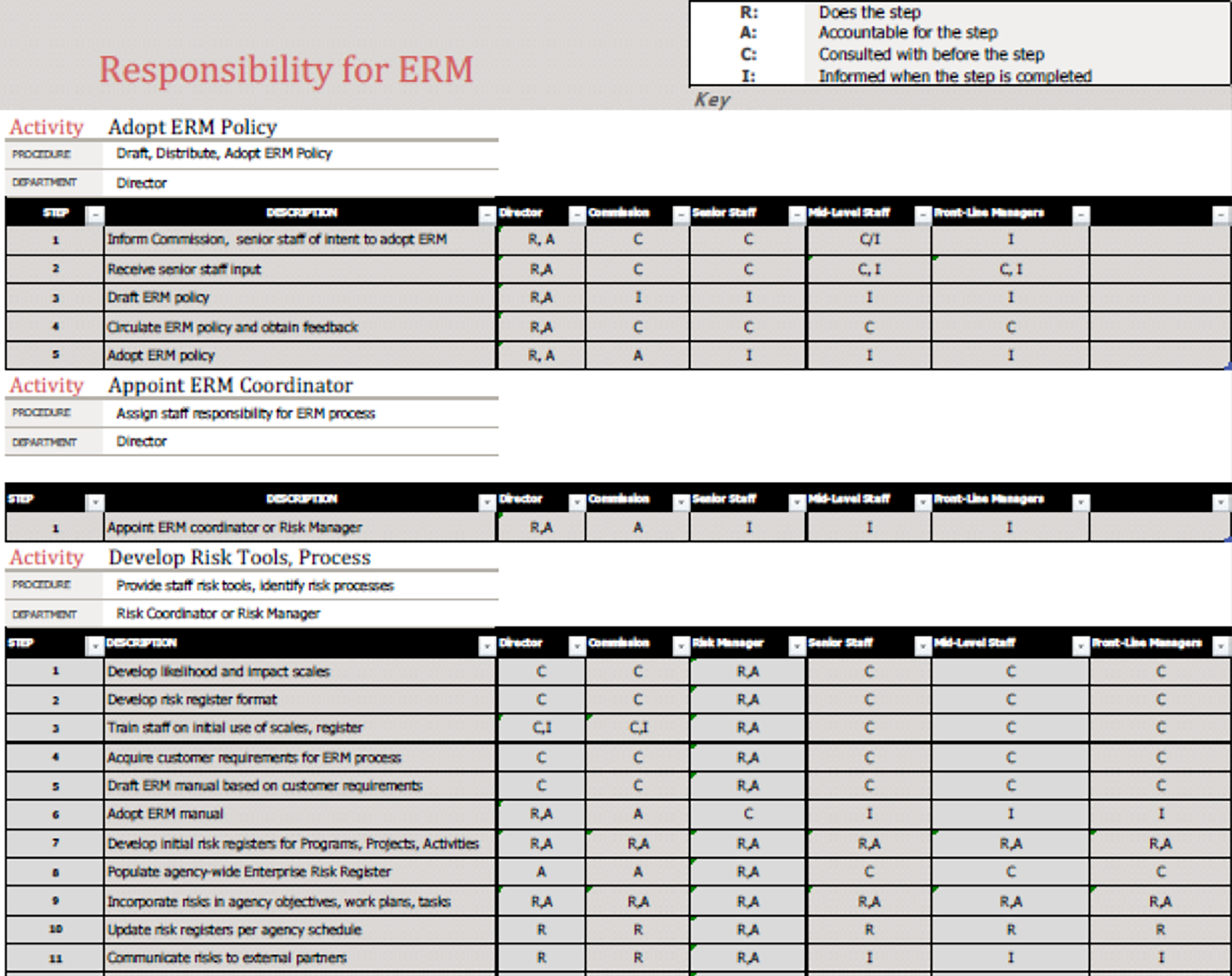 Source: AASHTO. 2016. Managing Risk Across the Enterprise: A Guide for State DOTs.

The City of Seattle has a Sidewalk Safety Repair Program to oversee the maintenance of the City’s many sidewalks and curbs to keep them safe and accessible. The Program includes a process for monitoring sidewalk conditions, investigating complaints of unsafe or inaccessible sidewalks, determining repair responsibility (e.g.., adjacent property owner, City, or other utility), using existing conditions to proactively mitigate conditions (beveling and asphalt shimming), and permanently repairing sidewalks that are the City’s responsibility. Repairs are leveraged with other capital projects as much as possible, so coordination with other Divisions is vital to the effectiveness of the program.

Because of the number of Divisions involved in managing sidewalks, the City assigned roles and responsibilities in a RACI matrix, that identifies those with Responsibility (R) or Accountability (A), those that need to be Consulted (C), and those that need to be Informed (I). The RACI matrix developed by the City includes one additional role beyond the four that are commonly included in the matrix. The City of Seattle added an “S” to represent a support role for personnel who might provide information to the process but are not necessarily responsible for completing the activity. The RACI matrix has served the City well by clarifying the responsibilities of each of the Divisions involved in some aspect of the Program so the program looks seamless to the public, as shown on the City’s website (https://www.seattle.gov/transportation/projects-and-programs/programs/maintenance-and-paving/sidewalk-repair-program). 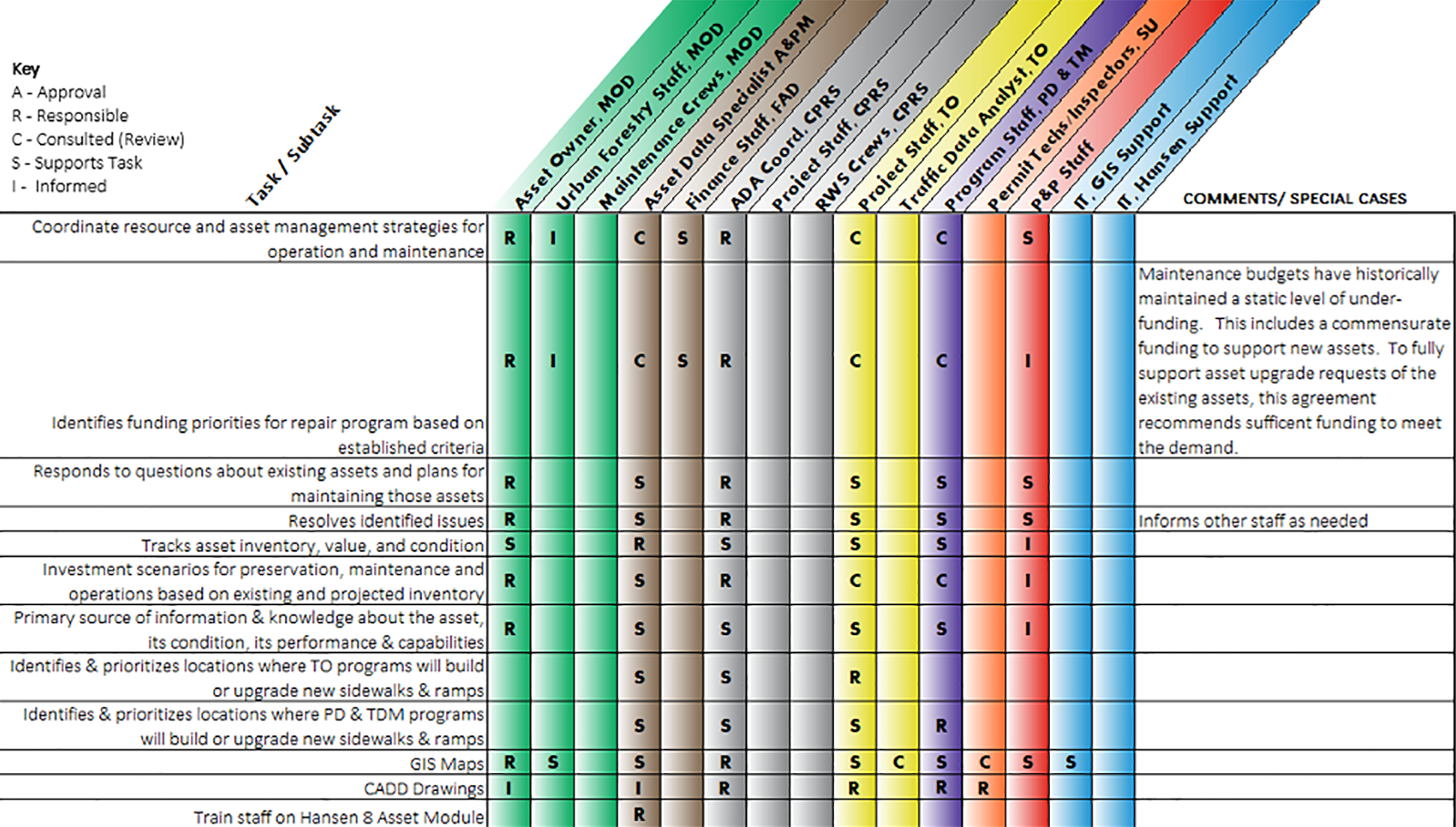 To help ensure success in the risk management process, agencies can consider these important factors.

How-to Use RACI To Create a Responsibility Assignment. Section 6.5.3

The development of a RACI matrix includes the steps listed here.